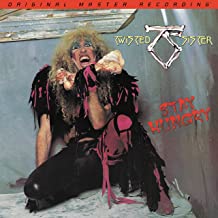 The iconic 1980s album that fought censorship rocks without compromise!

Pressed at RTI and limited to 3,000 numbered copies!

You wanna rock. And rock is what Twisted Sister does without compromise on Stay Hungry, an album that soon after its release became a leading symbol in the much-controversial fight against the Parents Music Resource Center (PMRC). Filled with good, clean fun, hard-rock ferocity, and laser-focused purpose, the triple-platinum effort receives deluxe treatment befitting one of the most iconic records of the 1980s courtesy of Mobile Fidelity.

Mastered from the original master tapes, pressed on 180-gram vinyl at RTI, strictly limited to 3,000 numbered copies, and issued in honor of the record's 35th anniversary, the audiophile label's reissue of Twisted Sister's signature work arrives custom-made for turning up the volume, letting your hair down, and embracing a freedom connected with carefree summers. If you've forgotten the instant emotional rush that comes from the sheer power of blustery guitar chords, in-your-face percussion, and the rousing menace of no-holds-barred vocals, Stay Hungry will instantly remind you there's no substitute for raise-your-fist-and-yell energy. Equally important, Mobile Fidelity's analog version proves the music goes well beyond the intentionally cartoonish humor of the popular MTV-aired videos associated with the hit songs.

Removed of prior veils and translucent artifacts, the record now breathes with an airiness, clarity, and openness that places the performances on a defined stage augmented with arena-sized amplification. Bass and drums take on far greater weight, impact, and size. Tones are crisp and possesses attack and bite. The compression that once suppressed the boisterousness, boldness, and bigness of Dee Snider's singing has disappeared. Far from a set simply intended for clinical listening, this definitive-sounding edition does everything but slip a patch-adorned denim jacket over your shoulders and encourage you to skip out on work (or math class).