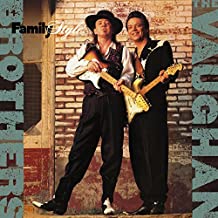 Plated and pressed on 200-gram vinyl by Quality Record Pressings!

With his astonishingly accomplished guitar playing, Stevie Ray Vaughan ignited the blues revival of the '80s. Vaughan drew equally from bluesmen like Albert King, Otis Rush and Hubert Sumlin and rock 'n' roll players like Jimi Hendrix and Lonnie Mack, as well as the stray jazz guitarist like Kenny Burrell, developing a uniquely eclectic and fiery style that sounded like no other guitarist, regardless of genre.

Stevie Ray had made music beyond the powers of most musicians but for this 1990 studio collaboration he returned to the things he loved: upbeat music and working with the brother he idolized his whole life. In his early years, Stevie Ray Vaughan often remarked that he would like to do an album with his brother. He fulfilled that wish in his very last studio performance, which was released nearly a month after his death. The liner notes end with "Thanks Mama V. for letting us play." With slick production from Nile Rodgers and employing neither guitarist's band (Double Trouble nor the Fabulous Thunderbirds), this is bluesy, but far from purist. Jimmie makes his vocal debut on "White Boots" and "Good Texan" and the brothers blur the lines between their expected guitar styles — Stevie sometimes going for a less sustained twang, Jimmie moving into Albert King territory.

As we did with our vaunted box set reissues, Texas Hurricane, again Analogue Productions is bringing you the finest-sounding Stevie Ray Vaughan collections ever preserved on 200-gram vinyl. Ryan Smith at Sterling Sound cut the lacquers for the LPs using the ultimate VMS 80 cutting lathe. Gary Salstrom handled the plating and the vinyl was pressed of course at Quality Record Pressings.

There's not a link in this chain that wasn't absolute first-rate. The absolute best that money can buy. We're passionate about the blues AND Stevie Ray and the passion shows up here in spades.


Side 1
Hard to Be
White Boots