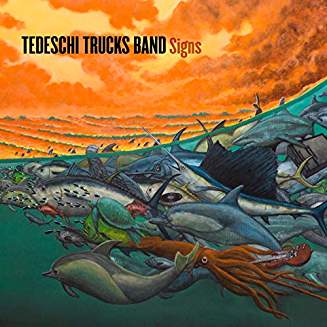 Mastered from the original analog tapes by Kevin Gray at Cohearent Audio!

Signs was recorded at Derek Trucks and Susan Tedeschi's home studio, Swamp Raga, on 2-inch analog tape giving it a warmth and richness that recalls the ambience of the best vintage recordings. Vinyl mastering and lacquers were cut from the analog master tape and pressed on 180-gram black vinyl for highest sound quality. Vinyl mastering and lacquers cut from the analog master tapes by Kevin Gray at Cohearent Audio.

"Signs, the fourth studio album by the Tedeschi Trucks Band, poignantly addresses some of the major changes this 12-piece group has been through over the last couple of years. That said, it's hardly steeped in sadness, but acknowledges reckoning and acceptance while leaning on hope. In November 2016, longtime friend Leon Russell died. In January, Derek's uncle Butch Trucks committed suicide. In May, mentor Col. Bruce Hampton (to whom Signs is dedicated) suffered a fatal coronary on-stage during his 70th birthday celebration (which Trucks and Tedeschi witnessed). The same month, Gregg Allman died after a years-long battle with liver cancer. And in June, keyboardist Kofi Burbridge suffered a heart attack that required emergency surgery.

"These events had an obvious impact on Signs, but it results in their most musically diverse offering yet. Sonically it remains in the band's trademark stew of blues, soul, rock, gospel, and improv, but also showcases a new songwriting sophistication and arranging skills. Co-produced by Trucks, Jim Scott, and Bobby Tis, these 11 tracks engage the full power of TTB beginning with the souled- out opener 'Signs, High Times' that places all four singers (Tedeschi, Mike Mattison, Alecia Chakour, and Mark Rivers) alternating up front in a call to rise above the swamp of self-pity. Burbridge's Wurlitzer is distorted and funky, and the horns blare in support as frontline players trade lines across a deep groove.

"'I'm Gonna Be There' is a gospel tune wherein Tedeschi displays astonishing skill as a vocalist. The lyrics' affirmation in the face of darkness is offered with clean, resonant emotional power, underscored by the backing chorus and intertwining guitars from Trucks and guest Doyle Bramhall II, as well as a string quartet sumptuously arranged by Burbridge. 'Walk Through This Life' — co-written with bassist Tim Lefebvre (who has amicably left the group) and Warren Haynes, who joins the backing chorus — is a soaring soul anthem with popping horns and wah-wah guitars that Tedeschi refuses to surrender to, no matter the toll loss extracts. "Still Your Mind" references the need for close community in the midst of life's challenges. Its music careens between garagey rock, loopy R&B, and nearly Baroque psychedelia. (Trucks' guitar break is absolutely unhinged.)

"'Shame' reveals the band's musical growth and steely grit simultaneously. While Tedeschi digs into her lyric with the commitment of Mavis Staples, tempos shift, horns fold in drama, and Trucks' guitars underscore the lyrics' emotional storm. 'They Don't Shine' is an uptempo rave that walks a driving line between Creedence Clearwater Revival and Ike and Tina Turner with Tedeschi wrangling her Stratocaster in the lead guitar chair. 'The Ending' is a wrenching Americana elegy for Hampton. Penned by the bandleaders with Oliver Wood, it's about the man, his absence, and the wisdom and magic he imparted during his lifetime. It creates an unexpected yet fitting conclusion to Signs, a recording that will surprise and delight TTB fans as their most adventurous to date." — AllMusic

Features:
• 180-gram vinyl LP
• Bonus 7-inch vinyl single with etching on one side
• Recorded, mixed and mastered on analog tape
• Mastered from the original analog tapes

Signs, High Times
I’m Gonna Be There
When Will I Begin
Walk Through This Life
Strengthen What Remains
Still Your Mind
Hard Case
Shame
All The World
They Don’t Shine