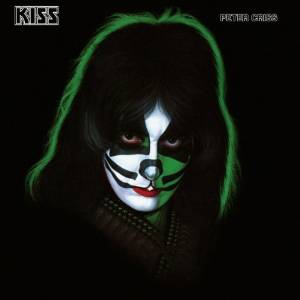 Kiss celebrates its 40th anniversary and its induction into the Rock And Roll Hall Of Fame with a series of individual 180-gram vinyl reissues from the band's celebrated catalog, including their 1998 effort Psycho Circus on vinyl for the very first time!

The four members of Kiss released solo albums on the same day in September 1978. Kiss drummer Peter Criss, a.k.a. the Catman, produced the lowest selling of the four solo albums, still, his solo revealed what a fine r&b/soul vocalist he was. Voicing a rasp somewhere between Bruce Springsteen and Rod Stewart, Criss tempers the expected ballads with equal doses of rock and funk. The opener "I'm Gonna Love You" is a first-rate soul stomper, complete with punchy horns and Supremes-style back-ups. "Easy Thing" and "I Can't Stop the Rain" are big, epic love songs that Criss and his sandpaper lungs deliver beautifully, and his snappy version of "Tossin' & Turnin'" holds its own.