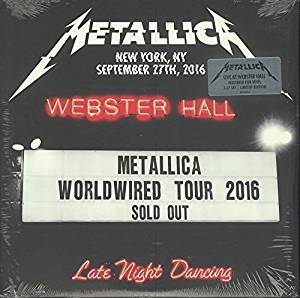 Newly mastered for vinyl and mixed by the team that brought you Hardwired...To Self-Destruct, the three-disc limited edition package is pressed on 140-gram vinyl and includes the digital download of the show as well. The set list includes the first ever live performance of "Moth Into Flame" along with 14 other tracks played at the historic theater.

Tracklist:
Disc One:
Breadfan
Hollier Than Thou
Battery
Harvester Of Sorrow
Guitar Solo
Fade To Black
Moth Into Flame

Disc Two:
Sad But True
Orion
One
Master Of Puppets