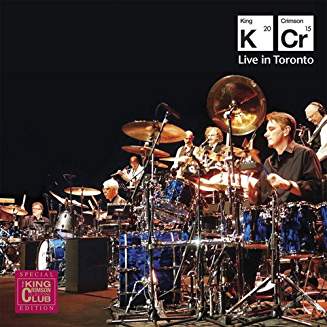 DGM & Panegyric are proud to present the first full concert release by the current lineup of King Crimson. This Official Collectors' Edition captures King Crimson on a single night in the middle of the band's Canadian tour in November 2015. With the exception of one small edit following an announcement and before the band take to the stage, the running time of this concert is exactly as it was heard in the hall by those fortunate enough to have been there. Even by the high standards set by King Crimson's current lineup, this concert was agreed by all involved to have that extra special ingredient, making it the perfect choice when seeking an official release to counter the poorly recorded bootlegs that have begun to circulate.

Featuring the recorded debut of new material such as "Meltdown" and "Radical Action," the three drummer percussion pieces "Hell Hounds of Krim" & "Banshee Legs Bell Hassle" & a variety of King Crimson classics — including material from "In The Court Of The Crimson King" performed and recorded live for the first time in decades, a return to the live set of "Easy Money" for the first time since 1974 & more recent powerhouse pieces such as "Level Five' & 'VROOOM" — all material that the seven piece King Crimson has made very much its own in an absurdly short time of touring.

Presented as 4LPs, each in its own protective inner polybag & outer album sleeve with a DVD (NTSC Region 0) featuring all audio in hi-res (Toronto material at 24/48, USA at 24/96) with 12" booklet, all contents enclosed in a rigid slipcase, presents the album in twin deluxe audio formats and with the same level of high standard packaging that has been used for the band's CD/DVD-a/Blu-ray boxed set editions.

LP1:
A
1 Threshold Soundscape
2 Larks’ Tongues In Aspic Part I
3 Pictures Of A City
B
1 VROOOM
2 Radical Action (To Unseat the Hold of Monkey Mind)
3 Meltdown