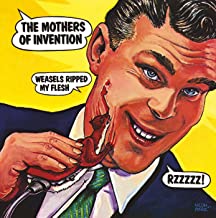 Five monumental Frank Zappa and The Mothers of Invention albums

Reissued on 180-gram vinyl, first time on LP in decades!

The Zappa Family Trust and Universal Music Enterprises are continuing their extensive reissue campaign by releasing five iconic works of the musical innovator on vinyl for the first time in decades: Cruising With Ruben & The Jets, Joe's Garage, Lumpy Gravy, Weasels Ripped My Flesh and We're Only In It For The Money. The albums spanning Zappa's incredibly fertile late ‘60s-late ‘70s period will be pressed on 180-gram vinyl. These are some of Zappa and his cohorts' most challenging, exhilarating and groundbreaking work.

Weasels Ripped My Flesh is the last album of recordings made by the original Mothers of Invention lineup released after it was disbanded by Zappa. The group, which included a horn section, made the blend of studio and live experimental and traditional tracks from 1967-69. Weasels Ripped My Flesh, released in 1970, provides a fascinating look at the group's range and diversity of influences, from avant-garde tracks like "Didja Get Any Onya" to the straight-up R&B of their cover of Little Richard's "Directly From My Heart to You." In an interesting historical footnote, Lowell George makes an appearance here with the band previous to forming Little Feat with bass player Roy Estrada.

1. Didja Get Any Onya?
2. Directly From My Heart To You
3. Prelude To The Afternoon Of A Sexually Aroused Gas Mask
4. Toads Of The Short Forest
5. Get A Little
6. The Eric Dolphy Memorial Barbecue
7. Dwarf Nebula Processional March & Dwarf Nebula
8. My Guitar Wants To Kill Your Mama
9. Oh No
10. The Orange County Lumber Truck
11. Weasels Ripped My Flesh