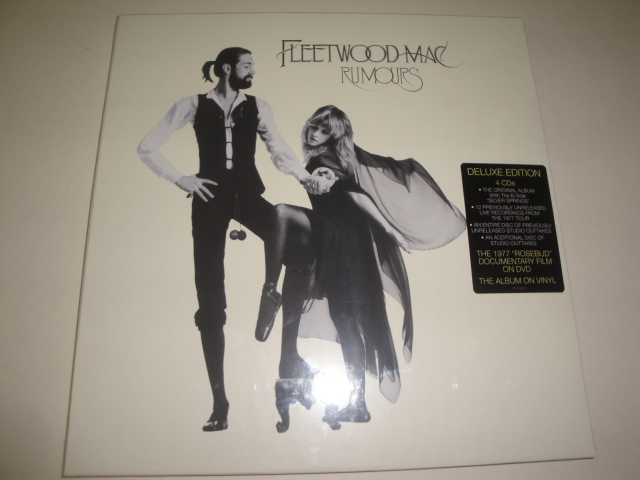 Four CDs, one DVD and vinyl LP of the album

Fleetwood Mac, one of rock's most enduring, beloved and successful bands, celebrates the 35th anniversary of its smash Rumours, with a deluxe version.

Rumours made the band one of the most iconic bands of the 1970s and garnered wide critical praise, earned the Grammy for Album of the Year, and has now sold more than 40 million copies worldwide since its 1977 debut.

This deluxe edition's three CDs include the original album and the B-side "Silver Springs," a dozen unreleased live recordings from the group's 1977 world tour, and an entire disc filled with unreleased takes from the album's recording sessions. The deluxe edition also includes an additional disc of outtakes, a DVD that features "The Rosebud Film" — a 1977 documentary about the album — and the album on vinyl.

The disc of 12 unreleased live recordings from the band's 1977 Rumours tour features performances from concerts in Oklahoma City, Tulsa, Nashville and Columbia, S.C. The songs include album tracks like "The Chain," "Oh Daddy" and "Songbird" as well as "World Turning" and "Rhiannon," two tracks from the group's 1975 eponymous release.

Producers also have compiled a selection of 16 unreleased recordings from the album's sessions including early takes of "Go Your Own Way," "I Don't Want To Know" and the popular B-side "Silver Springs." There are also several demo recordings, including one for the outtake "Planets of the Universe," plus an instrumental version of "Never Going Back Again."

The deluxe edition of Rumours also features three additional pieces. First is an 18-track compilation of session outtakes originally released in the 2004 reissue of the album. Next is the original album on 140-gram vinyl. Finally, there is a DVD with "The Rosebud Film." This 1977 documentary by Michael Collins includes interviews, rehearsal footage and live performances of: "World Turning," "Rhiannon," "Say You Love Me," "Go Your Own Way," "You Make Loving Fun" and "I'm So Afraid."