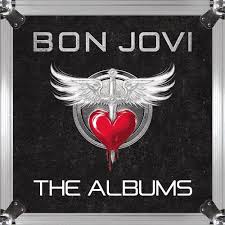 With more than 130 million albums sold, an extensive catalog of hit anthems, and nearly 3,000 concerts performed in 50 countries for more than 35 million fans, Bon Jovi is simply one of the world's most successful bands, ever.

From ubiquitous hits such as "Livin' On A Prayer," "You Give Love A Band Name," "Bad Medicine," "Always" and "It's My Life," to back-to-back-to-back-to-back No. 1 albums, Bon Jovi has created an ongoing legacy. This massive career spanning, 17 albums (25 LPs) vinyl set preserves the original look and sound of the originals — all LP jackets are exact replicas of the original album cover and songs have been mastered to the band's specifications to ensure exceptional audio quality.

This premium set includes all of the band's studio albums from Bon Jovi (1984) through This House Is Not For Sale (2016) plus a handful of premium bonus titles including Jon's solo albums Blaze of Glory (1990) and Destination Anywhere (1997) and compilations Burning Bridges (2015) and Extras (2017).

This is the first time Bon Jovi's albums from the 2000s have been pressed in any territory before, others will receive their first-ever U.S. vinyl releases, while many are being pressed for the first time in decades.