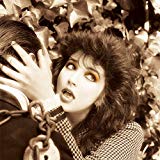 Remastered In Vinyl I

Kate Bush: Remastered In Vinyl I

- THE KICK INSIDE
- LIONHEART
- NEVER FOR EVER
- THE DREAMING

The art-rock icon personally remastered the material with producer/engineer James Guthrie, who previously worked on Bush's 1985 LP, Hounds of Love. The singer's 10 albums are spread across the three vinyl boxes, and the fourth features rarities previously unavailable on the format. Many of the records have been unavailable on vinyl for decades.

The original album art is retained for the box sets.

Of particular note for Bush fans is the treasures trove of rarities featured in the fourth vinyl box. Highlights include alternate and extended mixes (including a 2012 remix of "Running Up That Hill (A Deal With God)"), B-sides ("Experiment IV," "Walk Straight Down the Middle"), demos ("Humming") and a whole disc of cover tracks (Elton John's "Rocket Man," "Marvin Gaye's "Sexual Healing").

On December 6th, less than a month after wrapping the reissue campaign, Bush will release a book of her own hand-curated lyrics, "How to Be Invisible," via publisher Faber and Faber.