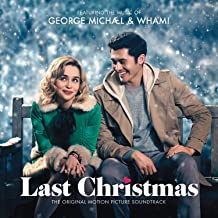 Soundtrack to holiday film inspired by the music of George Michael & Wham!

Last Christmas, the soundtrack album, features three fabulous Wham! songs including "Last Christmas" and "Everything She Wants" as well as 12 of George Michael's best loved tracks from his solo years.

Speaking of her meeting with George Michael that led to the making of the film, Emma Thompson said: "The wisdom and emotional scope of George's lyrics have always amazed me. So many feel like they were written for the movie."

"After I met George and experienced his compassion and understanding up close, I realized that in fact the movie was written for those lyrics."