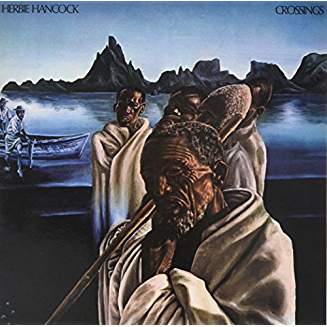 In the 1970s, Herbie Hancock's Crossings was to be found on every IKEA record shelf in the student pads of jazz-fusion fans. The cover, with its psychedelic touch, also contributed significantly to its popularity — although it was unclear where the crossing was going to take us ...

Nevertheless, the excellent trumpeter Eddie Henderson — often underestimated as an improviser and composer, and Benny Maupin — who like Hancock had grown up under Miles Davis's wing, present a wide range of sound-generating instruments — as was all the rage in those days. Synthesizer and Mellotron (a polyphonic tape replay keyboard and as such practically the prototype of the sampler) were permanent members of the group — and even produce here melodic arches of sound! Whether Bennie Maupin's "Quasar" launches the group and us into extraterrestrial territory (as stated in one review) is a moot point.

This LP is a contemporary historical document, though it certainly doesn't sound antiquated. That's why younger listeners too will find pleasure in this experiment from the previous millennium.