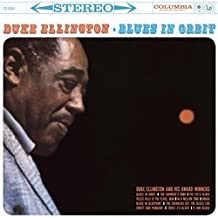 Remastered by Bernie Grundman from the original analog tapes

It's tempting for Blues in Orbit to be overlooked when Duke Ellington's best albums are discussed, but truly it's an undisputed gem. There are 11 tracks, none of them is longer than 4:50 and it is all good stuff. There are some familiar favorites such as "In a Mellotone" and "C Jam Blues" as well as less often heard gems like "Blues in Blueprint and "Sweet and Pungent." It is also in stereo, and the arrangements are superb.

The featured performers include Ellington stalwarts Johnnie Hodges, Ray Nance, Harry Carney and Jimmy Hamilton, as well as the less familiar Booty Wood and Matthew Gee. Johnnie, in particular is well showcased here, taking the lead not only in slow pieces like "Brown Penny" and "Sentimental Lady", but also in the rousing, "Smada."

The full Analogue Productions reissue treatment is at work on this smashing LP — famed mastering engineer Bernie Grundman handled the remastering from the original analog tapes. The lacquers were plated and pressed at Quality Record Pressings, maker of the world's finest-sounding LPs. Lastly we've stashed each super-silent 200-gram disc in a premium Stoughton Printing gatefold jacket.

All of the takes were recorded during after midnight sessions recorded over two nights starting on December 2, 1959 in New York at Columbia Records' studio on East 30th Street. Each night Duke's late dinner arrived at 2 a.m. — a sizzling steak, a pot of coffee with lemons in it, portions of American cheese, and grapefruits. After dinner, and a breather for the band, the sessions finished around dawn in a swinging fashion.

If you're just getting into jazz, this album is highly recommended as a great way to initiate your collection. The sound is incredible, with packaging to match. Another audiophile home run.