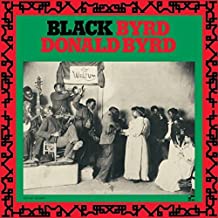 Initially, Black Byrd was offensive to jazz purists, who didn't immediately appreciate Byrd's foray into R&B. But the record went on to become the biggest-selling in Blue Note history – never before had a jazz musician embraced the celebratory sound and style of contemporary funk as fully as Byrd did here – not even Miles Davis.

For 2014, Blue Note - along with Universal Music Enterprises - is launching a major 75th Anniversary Vinyl Initiative that is dedicated to the proposition that Blue Note's catalog should be readily available at a low cost - featuring high quality pressings and authentic reproductions of Blue Note's iconic packaging.

Side 1
Flight Time
Black Byrd
Love’s So Far Away

Side 2
Mr. Thomas
Sky High
Slop Jar Blues
Where Are We Going?