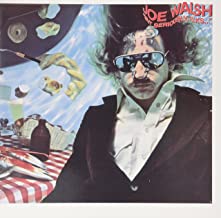 There aren't too many legends like guitar hero Joe Walsh. From his Midwest beginnings with The James Gang, he racked up enough significant sales and airplay to warrant his very own massive solo career, then performing later with Barnstorm and then three decades plus with The Eagles.

As if a whirlwind tour and unbelievable album success with The Eagles' Hotel California weren't enough for this spirited guitarist, Walsh went back into the studio in 1978 and created his own top chart platter But Seriously, Folks. Filled with eight unprecedented Walsh rockers, But Seriously, Folks was truly one of his most enduring classics in large part due to the eight minute burner "Life's Been Good." This song will forever be associated with the '70s rock superstar lifestyle binge as it was also a featured song in the rock movie soundtrack extravaganza "FM".